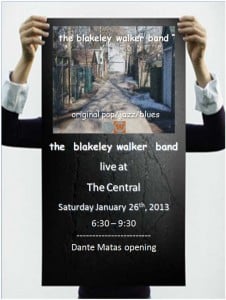 The blakeley walker band performs at The Central in Toronto on Saturday, January 26, starting at 6:30. The Central is in the Annex, at 603 Markham Street, Toronto (see map below). Stacey Shopsowitz joins them on bass and Xavier Enriquez on drums. Dante Matas opens at 6:30, and the band starts at 7:30.

Sandy and Eric are members of the Toronto Songwriters Association. Accomplished songwriters and musicians on their own, they have also played together and co-written many songs over the years. There is a melding of songwriting and stylistic individuality, and tight musical and vocal cohesion whenever they perform together at TSA meetings. That’s what you are in for at The Central on January 26. 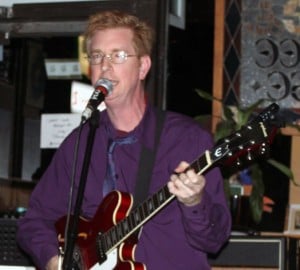 Robin Peacocke made a video of one of Mike’s tunes on her iPod at The Only Café. View the complete post to hear Mike singing The Cabin, which he wrote for a recent TSA monthly songwriting assignment… 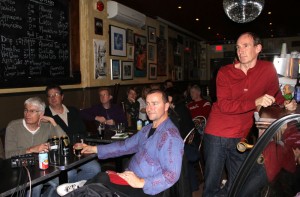 The TSA had a great gig on November 24 at The Only Café. Thanks to John Beairsto for organizing it. Eric contributed a terrific PA system (Bose L2). You could hear and see the positive effect it had on the performances and the audience enjoyment.

More photos of The Only Café~>